My recent visit to a used bookstore netted me a couple of relics from my past reading, including a paperback of Catherine Asaro’s The Quantum Rose. For those who have not read any of Asaro’s Skolian saga, this book might make a good starting point, but it is probably a better read for those who are already familiar with this rather involved science fiction/fantasy/romance series. 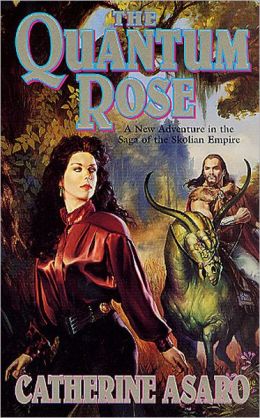 Asaro’s bio is almost as mind-boggling as her stories: She holds a doctorate in chemical physics, and she is a former ballerina, jazz dancer, and sometime singer. Her books include near future science fiction, such as The Veiled Web and the Phoenix Code, the 14 (or so) volume Skolian saga, which begins with Primary Inversion, The Lost Continent series, The Uplift Saga series, and more.

For me, this book is really hard to quantify. One tag line is that it is a re-telling of Beauty and the Beast. Uh, not really. Another is that it is a physics allegory, and the author ‘s note at the end makes every effort to explain the book via that lens, and while interesting, I kinda got lost in her description of particle physics after a while. Certainly this book is a romantic science fiction story, and there’s really not much high brow competition in that sub-genre. While readable, Asaro is never simplistic.

This story does fill in some gaps in the Skolian saga, which generally tells the story of members of the Ruby Dynasty in a book (or two.) Interestingly, the point of view character in The Quantum Rose is Kamoj Argali, a young ruler of an impoverished province on a backward planet, and not a member of the Ruby Dynasty. Kamoj does end up entangled in their saga, because she becomes involved with Vyrl, one of the Ruby Dynasty, who is sojourning on her planet for a while, and they end up falling in love.

The first part of the book is all about Kamoj, Vyrl, and the complications of her previous engagement to a local leader of questionable morals, Jax Ironbridge. This first half is more romance than sci-fi, although sci-fi elements are present. The second half is mostly set off of that world, filling in certain backstory aspects of the Skolian saga, with more science fiction and a heavy dose of fantasy. At this point, the romance takes a back seat to the political machinations that are part and parcel of the Skolian yarn.

While I enjoyed The Quantum Rose once again, I have trouble understanding why it won the Nebula award, which goes to the best science fiction novel of the year (via a vote of the SFWA). Yes, it is skillfully written and the quantum part of the title is justified, at least in the author’s notes after the novel, as “playing with quantum scattering theory.” Still, I have to wonder if it was really the very best science fiction novel of 2000. I like most of the Asaro novels I have read, and I think some of the others are better than The Quantum Rose. Hum, maybe it was the lack of competition.

For me, the works of Pauline Baird Jones are hit and miss. My favorite of her stories is the first one I read (The Key, also known as Project Enterprise, Book 1). I’ve read several other of her novels, and her style is generally a blend of snappy dialogue, kick-butt heroines, romantic suspense, and sufficient action to keep the reader entertained.

My most recent read is billed as Book 6 in the Project Enterprise series. The main character is Arian Teraz, a young woman whose place in the universe is destined to be an arranged marriage a tilling some farmland on a rather primitive planet. Right before she must marry, a mysterious ship lands in front of her and invites her to take a chance on another life. As the ship leaves her home planet, they are attacked, and somehow she steers the ship through a wormhole. On the other side of that is a pilot named Cooper. This is where fans of Project Enterprise novels will see how this story fits into the series.

Found Girl contains the snappy dialogue, action, and Jones’ trademark blend of science fiction and fantasy elements. I read an eBook version, which is $4.99 at this writing.

After seeing the second Star Trek reboot, all I can say about the new Star Wars is that I have a lot of hope and fear. Hope that it will be worthy of the Episode IV-VI trilogy, and fear that it will be even worse than episodes I and II. I actually kinda liked Episode III.

Harrison Ford looks older than dirt, but I’m not particularly young myself. Of course, any action will fall to the younger cast members, so let’s hope that the writers crafted them well. Abrams can make it look great, but if the writing is bad, nothing can save it.

The topic of America’s fiscal future as a topic is a departure for me, for sure, but this post is writing related. The power of Hollywood, especially series television, but also film, is the most important factor in American culture. No kidding! Generations of moms name their babies after popular characters, for instance.

In American television and film, doctors invariably are able to work miracles. Patients die and are brought back with CPR, and so everyone these days is urged to take CPR training. No one on television has broken ribs from the procedure, which is common in real life, and almost everyone coughs a couple of times and is good as new by the next commercial break. But, in real life, most such heroic efforts are in vain. Hollywood thrives on heros and heroism, so extreme measures are rewarded.

However, in real life (and death) most folks who are at death’s door are going to go through it. One out of one persons on this planet will die. Most doctors, who do know the truth, will not take cancer treatments for late-stage disease. They don’t, because they have seen “good” deaths and “bad” ones, and they want to avoid the latter. But family members, brainwashed by the success rate of heroic doctors on the screen, often insist on the latest treatments for family members, even when the pathetic success rate is clearly stated. These acts of love, which often cause patients to be miserable because of side effects of chemotherapy, radiation, or surgery, cost millions of dollars. Few lives are saved, and if they are lengthened, it might be for months, at best. The most expensive years of life, for many Americans, are the last two.

My husband is a cancer survivor. His illness was treatable; that is, his doctor stated that with treatment, he had an 85-90% chance of living out his normal life. Thus, the treatments, which were grueling, were appropriate. I am not speaking of that scenario. Plenty of people are cured or helped by treatments, but side effects and outcomes need to be discussed frankly.

But, because Hollywood’s fictional doctors can cure even the most hopeless of patients, many Americans have totally unrealistic expectations. And, since our doctors, the real ones, are paid for performing services, the money flows from insurance companies, especially the ones funded by the U.S. Treasury, into their accounts. Doctors are trained to preserve life, and are paid for procedures, so they have incentives to continue aggressive treatments, and well-meaning family members can add more incentives. No one wants to say, “It is time to let go.”

Please, script writers and producers, lets have a new wave of handsome, dignified actors “go gently into that goodnight.” This dose of realism would greatly help families avert feelings of guilt for not doing enough for their loved ones, and it would also save patients from the miserable deaths associated with vigorous treatments. A serendipitous side effect of the Hollywood treatment would be a vast reduction in medicare and medicaid bills for those who are going to die, and die soon, anyway.

Be courageous, Hollywood, and write about death and dying in a manner that is more realistic and, ultimately, more kind.