Lots and lots of readers give S.E. Smith’s books five-star reviews. Honestly, I just could not do that. This is my first read of one of her many novels. Really, there is much to like in it, including a heroine who needs so much that the reader wants her to finally have her HEA. Her life on earth went from great to troubled to “get me outta here,” and somehow she was brought to another planet (universe?) I’m not sure; that part was kinda fuzzy to me. However, there is plenty of action. Still, this is more fantasy than sci fi. There are auras, a goddess blessing the union, yadda, yadda. I’m a fan of science fiction, which has lots of themes, but I am not much of a fan of fantasy. Remember in the original Star Wars (now episode 4) where Han Solo tells Luke he’d rather have a blaster instead of relying on the Force? I am a blaster kind of gal.

Basically, it is a romance wearing SFF garb, with and emphasis on the second F. Oh, and if you like lots of good loving (with some sex) then this might be a treat. For me, sex is not a spectator sport.

Some characters and situations appear to be borrowed from other novels by this author, so fan of Smith might enjoy those, but it is a bit like being a friend at a family reunion. The book does stand alone, but some of the clutter of characters could be eliminated.

Only Human is my second Chris Reher novel, but this is actually book 3 in the series, which features  Nova Whiteside, a military pilot in some future universe. For me, neither the plot nor the characters were as novel this time as they were in the first one, but this is a good book. It begins with Nova being rather bored at a training facility; however, readers are briefly introduced to her father, Colonel Whiteside. Before readers have a chance to get bored along with Nova, she is transferred (perhaps a bit of a promotion, but no change in rank) to the Vanguard, and she is specifically assigned to a Delphian officer, and they are off on a journey. At first they don’t get along so well, but as the action develops, so does the main character’s affection for her commander.

In an effort to avoid spoilers, I’ll just close by saying the main character is engaging, and there is a good bit of action and suspense. Fans of hard science fiction may have trouble with this story, as some aspects are rather like Star Trek, but that usually doesn’t bother me. There are enough editing glitches to keep this from being a five star novel, but for an indie author, it is quite good. Fans of military fiction and/or strong heroines should enjoy the further adventures of Nova Whiteside. 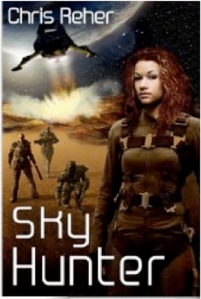 There are taboos in writing fiction, including this one: female characters can’t be raped. I don’t approve of this crime, any more than I approve of murder, of child molestation, of armed robbery, of well…lots of felonies. Still, crimes do happen, and if a novel is to keep it real, sometimes bad things happen to the main character. Still, rape is taboo. As a writer, I have paid the price for violating that taboo. And, this isn’t much of a spoiler, but in Chris Reher’s Sky Hunter, the heroine does have that experience, early in the novel. But, this is a serious tale of warfare in space, and bad things happen, including the afore mentioned violation.

Now that I have that out of the way, let me say that Reher’s Sky Hunter is a very, very good space opera. The main character is one I wanted to see overcome the difficulties of the opening chapters. Caring about the heroine is absolutely necessary, especially when a book isn’t a light-hearted romp. The other characters, at least some of them, also enjoyed significant development, and the plot twists like a scenic mountain road. Reher’s world building is pretty good, too. For military buffs, there is action aplenty, and enough political intrigue to keep the reader guessing.

Right now, this book is free as a Kindle title, and I highly recommend it to fans of military fiction. But, if you’re a whimp, don’t bother.