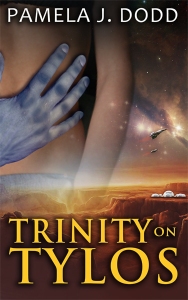 Venice Dylenski is the security chief of the colonization vessel Excalibur, and at times she is bored because she has very little to do while the ship is cruising through space. Indeed, she wonders if her husband’s position as executive officer of the ship is the only reason she is even onboard.

But the Excalibur is about to encounter Azareel, an alien captain with superior firepower and a hidden agenda. While seeking a home for human colonists, the crew of the Excalibur meets the Archeons, who take Venice and a companion captive. In short order, Azareel informs his prisoners that they will play a critical role in revitalizing his dying race, that of surrogate mothers to genetically engineered Archeon offspring. Venice, reluctant “to be the next Archeon soccer mom,” strives to escape, but her companion seems all too willing to cooperate with their captor.

Trinity on Tylos has complex characters faced with myriad problems to solve, set in a future where man may have escaped the bounds of his solar system, but not the bonds of human emotions.

Online reviews of Trinity on Tylos:

“…it starts out like a typical science fiction novel, and then, suddenly, takes off into undiscovered country. The author has a great talent for putting emotions into words; I truly felt what the characters were feeling throughout the story. To make things more interesting, the characterizations are so complex that there are no “good” guys, nor “bad” guys, only complex people doing what they must to survive.” —Fallen Angels Reviews

“TRINITY ON TYLOS is a fascinating science fiction thriller starring a courageous heroine and a desperate race on the eve of extinction. The dilemma confronting Azareel grips the audience as he does deeds he hates, but considers for the greater good of his species supersedes his personal feelings; interestingly Venice is his ethical mirror as she struggles with what to do. This is a strong morality drama that requires one enormous light year leap of faith well worth the jump.” — Review Centre

“TRINITY ON TYLOS … is instead a thought-provoking book that will challenge one’s beliefs about the importance of motherhood, duty, and sacrifice. At times, the choices made by Venice and even Allie are ones the reader will disagree with and perhaps even be angered by them. However, one of the trademarks of a well-written novel is its ability to inspire others to debate. TRINITY ON TYLOS accomplishes this and so much more. Pamela J. Dodd has truly demonstrated her gift as a writer with this stunning book.” —CK2S KWIPS AND KRITIQUES