The other evening, I told hubby that I wanted to see La La Land

on HBO Go. Like many men, he is a direct, compartmental thinker, and he wanted a succinct description, like a phrase. Complex sentences and paragraphs are too much after a hard day at the office, so I said, “It’s a musical.” And he said, “What kind?” Based on the tone as well as the question, I was getting the drift that he didn’t want to try this one, so I said something like, “We’ll talk about it later.”

Today, weary of grading essays, I turned our sorta smart TV to HBOGo and found La La Land. Before the end of the opening number, a sort of modern fantasy about singing and dancing in traffic, I was already glad that I decided to forgo explaining the film to my husband. He is just not gonna go for this sort of film.

That’s not to say it is bad, for it certainly isn’t. But, this clever film is not going to be pigeon holed into a category, although HBO places it under “romance.” The film pays homage to Hollywood in particular and the entertainment industry more generally, and the characters certainly are passionate about their craft, but they struggle to pave a path to personal success. Work gets in the way of their relationship, but there are some seriously romantic scenes in this film. Ryan Gosling and Emma Stone have both moved up a few notches in my estimation, based solely on the way they conveyed emotion through song and dance and just looking at the camera.

As I was searching for an answer to “What sort of movie (or musical) is it?” I read several reviews. The one at RogerEbert.com comes the closest to explaining it, and I don’t want to spoil it or plagiarize, so I will merely provide the link. However, should hubby ask again, which I rather doubt, I have my answer: “It’s a different sort of musical.” Yep, it isn’t peculiar, nor avant gardé, nor off-beat. It is just different. 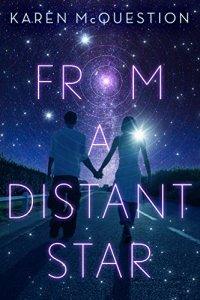 There are many themes in science fiction, and the one about an alien who is trapped on earth entering a host body isn’t exactly a new plot line. However, in this young adult novel, Karen McQuestion taps into the “kids dealing with big stuff” storyline that seems to be popular right now. (Think “Stranger Things” on Netflix or even Stephen King’s, IT!

on the big screen.) Anyway, I didn’t find it difficult at all to get into this book and stay with it until the end. The main characters, Emma and her cancer stricken boyfriend Lucas, are believable, engaging, and their exploits are entertaining. Emma is particularly well drawn, and she is the point of view character for most of the novel.

I’m not a big fan of young adult fiction, but I genuinely believe that the most creative stories these days are found in that genre. Publishers, large and small, are not prone to take any chances with fiction intended for adult audiences, but they are more open to new authors and new ideas in YA fiction. This has been true for quite a while, and this trend plays out on the big screen. The Harry Potter novels were quite successfully adapted to film, as were the Hunger Games novels. The Divergent Series is another YA science fiction series that made it to the big screen. Even Twilight and its sequels begat movies.

Probably From a Distant Star

won’t be the basis for a Hollywood block buster, but it would make a dandy film for the folks over at the SyFy channel. In the mean time, readers can find it in various formats, from $4.49 for the Kindle ebook to $10.95 in hard cover.