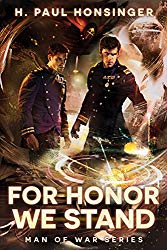 I’ve enjoyed this series by H. Paul Honsinger, a trilogy that begins with To Honor You Call Us

, as a space opera for fans of David Weber or others in that vein. Lots of authors try this sub-genre (and my Trinity on Tylos dabbles in it for a few chapters), but most such efforts don’t hold my interest. Honsinger’s universe and characters are well thought out, and therefore more entertaining than other authors.

His villains (the Krag) are truly obnoxious, and his hero, Captain Max Robichaux, has the right stuff to be a hero, but isn’t perfect, which is an unfortunate side-effect of being too heroic. Authors much achieve some balance, and Honsinger does that quite nicely. The captain’s side kick is Doctor Sahin, who is a bit like Dr. Watson’s being a sounding board for Sherlock Holmes. The situation is dire, for the enemy and the lengthy war have affected the human race in negative ways, such that surrender is unthinkable and victory an uncertain quest.

For Honor We Stand  is the middle book in the series, so I hope to read the final book soon, and I’ll try to post a more through review of the trilogy.

D. A. Boulter was one of the first authors I read when I first downloaded the Kindle app for my (now passed on to a grandchild) iPad2. Gosh, I loved the app, the book, and that iPad. Fast forward a few years, and I have quite a few ebooks, a newer iPad, and more time to read.  I recently purchased Not With A Whimper: Producers

. Despite the odd title, this novel fits into the “universe” that I first explored when I read Courtesan by Boulter.

I was prepared to love this book, as I have generally liked most of the books I’ve read by the author, and the description seemed interesting. However, as I slogged through the early parts, I wasn’t so sure. Somewhere around the 50% read portion I got seriously interested, but in the interest of not spoiling it, I won’t say why. The rest of the book was a quick read.

The main character of this story is a not quite 19 year old Larry Clement, and in many ways this story reminds me of the coming of age yarns that were the foundation of Robert Heinlein’s science fiction writing. Larry is a very unhappy young man, but a fundamentally good person, as the story opens. His girl, Sandra, and his fellow students are not fleshed out too well, but the relationship with his father is a main focus, so dear old dad, aka Robert Clement, is also a well thought out character. While I think that Courtesan is among this author’s best works, it isn’t necessary that readers read it first, as this novel stands alone quite well. However, the stories do share some characters, so I enjoyed the connections.

When I last reviewed a story by Boulter, I commented that his works don’t have many reviews and seem to have few readers. That’s a shame, because this guy has plenty of stories in him, good ones, and in a time when there is such a dearth of new material for readers, he deserves more reviews and the readers that write them. Indeed, anyone who likes science fiction or simply a good story should check out D. A. Boulter’s $2.99 Kindle books. Honestly, that’s cheap reading— less than a decent hamburger! 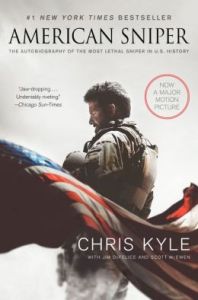 Okay, I admit, I have a tendency to do certain things backwards. Hubby laughs at this one: whenever I pick up a magazine, I thumb through and begin reading somewhere near the back. I sometimes do that with catalogues, too. Why? Because the snazzy pictures are in the front, and the words are in the back. I like words.

American Sniper, the movie, is in theaters in my area of the country as I write this, which means it is the perfect time for Pam to read the book! Chris Kyle’s exploits are apparently quite controversial, based on the reaction to the film, but I did not find it so much controversial as conversational. After I finished, I felt like I has spent a while talking with this Texas cowboy turned Navy Seal, who loved guns and his country enough to go back into a war zone, over and over.

Why is Kyle’s career a controversy? There are those who feel that Americans were invaders in Iraq. Okay, I see that. A little bit, anyway. Any war on foreign soil will have that aspect. And there are those who feel that being a sniper, hiding behind a big rifle with a bigger scope, is a cowardly way to fight. That I don’t get, at all. Guerilla warfare is not new. And, in the war in Iraq, with insurgents attacking government installations and convoys, having a sniper on every tall rooftop made a lot of sense. As he often puts it in the book, Iraq was a “target rich” environment. His recorded number of “kills” is far above any other sniper, and he is matter of fact in explaining that his accomplishment was in part due to being in the thick of things for four deployments.

Kyle’s story, which begins during his childhood in Texas, is entertaining and quintessentially American. When he discusses the war, it is the voice of a military man, explaining what happened from his point of view. Also of interest are brief interludes where his wife, Taya, discusses what was happening from her perspective. This gives the story more depth because modern warfare can happen so far away that the combatant’s home country is isolated from the realities of war. The price paid by the family is made quite real through her observations.

If you haven’t read Kyle’s autobiography, you might want to give it a try. Although it becomes a bit repetitive, because what he did on a day-to-day basis didn’t change all that much, his voice is strong throughout the book, and Chris Kyle was a man’s man in a country that has, by and large, gone soft.