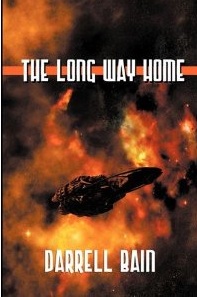 One of my favorite eBook authors is Darrell Bain. I think of him as the master of plots. Oh, there are some problems with his writing, primarily in the “show don’t tell” category, but this guy writes the most amazing yarns.

In the dedication of The Long Way Home, Bain recognizes three important Baen Books authors— David Weber, John Ringo, and Travis Taylor. And fans of their brand of science fiction will no doubt see that these authors influenced Bain in this space-based tale. Weber writes military science fiction on a grand scale; Ringo puts the grunt into military fiction, and Taylor is a rocket scientist who can also spin a good space opera. Bain doesn’t do any of those quite as well as these guys, but he does blend the elements quite well.

The plot is not unusual, with opening scenes of an exploratory vessel far from home, and a first contact mission gone awry. But instead of one or two explorers meeting a premature end, as happens in James Alan Gardner’s Expendable series, there is a massive loss of life and starship, and a small “longboat” known as “The Hurricane Jack” is left to ferry the survivors home. And it isn’t a short journey, hence the title. There are many obstacles, and the conflict is almost non-stop, between the “monkeyclaw” ship following the survivors, and the internal debates over matters in the tightly packed small ship. The mission is now to save the survivors and warn the human population about the vicious species they wished they had left behind. As a small vessel, the longboat must stop to scavenge material, and every stop has some built-in danger. Unlike some writers, Bain is not afraid to kill off his characters, which ramps up the peril factor.

Fans of space exploration stories should enjoy the action-packed suspenseful voyage of “The Hurricane Jack” in Darrell Bain’s The Long Way Home.