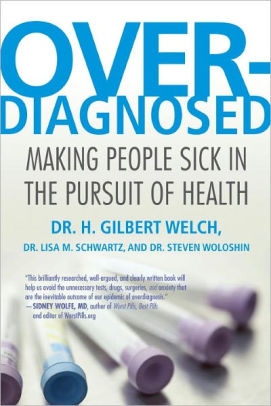 Like many people in the USA, I am concerned about the state of our health care. Don’t get me wrong, I’m grateful to live in a country that has lots of great medical facilities and practitioners. But, I’ve watched people go through some pretty difficult situations, too, so I read Over-diagnosed: Making People Sick in the Pursuit of Healthcare in hopes that I’d learn more about what sometimes goes wrong with our healthcare system. This book offers some first hand insights from three physician authors, and I learned a great deal from it.

Many of the chapters have a “case study” to frame the discussion. One of the most memorable is the story of an older gentleman with a borderline diagnosis of diabetes. In the interest of keeping those blood sugar numbers in the optimal range, the principal author (Dr. H. Gilbert Welch) prescribed medication. Unfortunately, the gentleman’s blood sugar dropped, causing him to lose control of his car, resulting in an accident that broke his neck. The gentleman survived, but he had to wear a halo brace for many weeks while his neck healed. When it was all over, the doctor and patient agreed that the best practice in his case would be to forgo the diabetes medication. This anecdote is a great way to illustrate how over diagnosis can make people sick!

Each chapter explains how modern testing, coupled with ever changing standards for “normal,” have resulted in more and more people being diagnosed with something. The approach is cautionary, explaining that many times a diagnosis might be correct, but if the condition is unlikely to cause the patient any reduction in quality of life, or end the patient’s life early, then it is far better to not treat the disease. However, once diagnosed, both the patient and most physicians will be reluctant to “watchfully wait.” Indeed, the principal author states in the introduction that he does not have routine checkups, even though he works in healthcare and could easily do so. Instead, he waits for something to go wrong. As the old saying goes, “If it ain’t broke, don’t fix it.”

The mammogram is probably the first test that my doctor wants me to have done, but our author states that for most women, they do more harm (due to radiation) than good. Aggressive cancers can develop in the one to two year interval between tests, but slow growing cancers can result in over-reaction by doctors and patients. Also, many women go through the “false positive” situation, which might mean more testing, including a breast biopsy. I’ve known several women who had that done, only to find out that the mammogram was incorrect (or incorrectly interpreted.)

Another interesting story is a conversation between the author and a pharmaceutical rep. The latter was touting the benefits of a drug for women with bone density issues. After a friendly discussion, the drug company rep admitted that the greatest risk for these women is mostly hip fractures, which can lead to all sorts of problems, including premature death. The author states that helping women prevent falls, though physical therapy and other practical measures, would be much more useful. And the testing phase of the drug was eventually discontinued due to subjects developing bone cancer.

The author is firm in his stance that patients are often over-tested and over-diagnosed. He believes that many doctors do this out of an interest in finding answers for their patients, and not merely in making more money. He is also firm that the threat of a law suit can be a driver for hyper testing and the end result of over-diagnosis. I’m all for people having the right to seek redress in the case of gross malpractice, but doctors who have been the defendant in a case, win or lose, will often err on the side of caution and order tests that probably aren’t needed and will refer cases that are only marginal. The costs of this mind set are not negligible, as tests can costs hundreds or even thousands, and that doesn’t include the costs of treating a condition that might not need any treatment. Nor does it address the mental stress of having a chronic “condition.”

Common sense is sorely lacking these days. Certainly many aspects of modern America are getting totally weird, so I guess it is not unusual that medicine is affected. I am grateful to Dr. Welch and his fellow authors for this very cogent discussion of the problem of over diagnosis. I am seriously contemplating what to say at my next doctor visit, when I will face that computerized list of items that modern medicine says I need, but just might result in me joining the long list of those who are “over-diagnosed.”