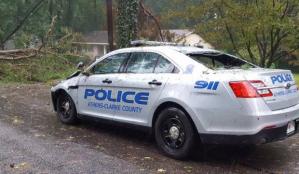 I’ve been picking up limbs—wheelbarrow load after wheelbarrow load of sticks. Some of the sticks were dead limbs, with no leaves attached, and some of the limbs have some greenery still clinging to them. All of these limbs were torn down by the 45+ miles per hour gusts associated with Tropical Storm Irma. And, as I lost electricity for just over an hour, and phone and internet for just over a day, I was darned lucky.

Nearby towns seemed to have it worse, and I’m not sure why, other than the population density is greater in some areas, so there is more infrastructure to break. Of course, as a whole, northern Georgia, which I call home, got out lightly, because we were where folks from the coast evacuated “to” rather than “from.”

I usually have some emergency supplies on hand, including freeze dried meals such as Mountain House Biscuits and Gravy and Mountain House Noodles & Chicken

, but I didn’t need any of them. Still, as a country bred woman, I do keep plenty of emergency supplies on hand, including lots of AmazonBasics AA Performance Alkaline Batteries

along with my small radio, flashlights, and so forth. I charged up my 2 in1 Lipstick powerbank LED Flashlight too, but with only an hour of outage before the nice folks at Jackson Electric got things working again, I didn’t actually use it. Getting prepared for the storm, for me at least, simply meant a quick trip to the grocery store to be sure we had survival items such as pre-cooked popcorn (yum!) and some bread for the peanut butter I generally have on hand.

Wherever you are, I hope you are doing well. I’ll write some more soon, but there are still some limbs to add to my growing burn pile.