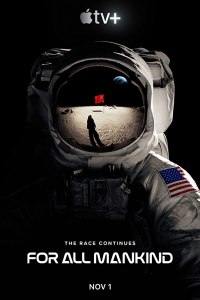 With the purchase of a new device from Apple comes a free subscription to their relatively new paid streaming platform. As hubby and I are often seeking a new television series to binge watch, we just finished For All Mankind on the Apple platform, and overall, we liked it quite a lot. However, I read several reviews, with criticisms being at least as numerous as the accolades, and often both are well deserved. The series was developed in part by Ronald D. Moore, who has a stellar (pun intended) reputation for writing and producing excellent science fiction, from Star Trek the Next Generation to Outlander, and with the simply superb reboot of Battlestar Galactica in between.

The scenario is quite promising: In an alternate history, the Soviet Union beats the United States to be the first nation to put a man on the moon, and the growing rivalry between nations causes the space program of the United States to flourish, rather than founder. Neither our citizens nor our politicians like being second best, so the need to catch up and surpass drives the plot. As an alternate history, many of the characters are based upon real people, but quite a few characters are inventions. Even those who are based upon real people have different adventures (or mis-adventures) due to the fictional nature of the series. The acting is good, as is the writing. The effects are very good, also. The sets, props, and costumes are really amazing—it’s truly a back to the 60s look. So far, so good.

But, as many negative reviewers have noted, the series is typical of our “social justice” modern agenda. Immigration, same sex relationships, race relations, and feminism are more than just sub-plots in this re-imagining of the space race. Each of these social justice themes has a story arc devoted to it, and these themes are every bit as strong as the “what if America had continued to send people to the moon?” theme that is the advertised plot line.

Alas, any subtle use of themes is no more. This alternate history is very good, but the social justice warriors are using a sledge hammer to right perceived wrongs. For All Mankind is just like many modern day productions in that regard. What could have been A+ for Apple’s streaming service is instead closer to a B-.

If you have Apple TV, check it out. If you don’t, I wouldn’t buy it for this series alone.